2020 was a good year for the fight against corruption. 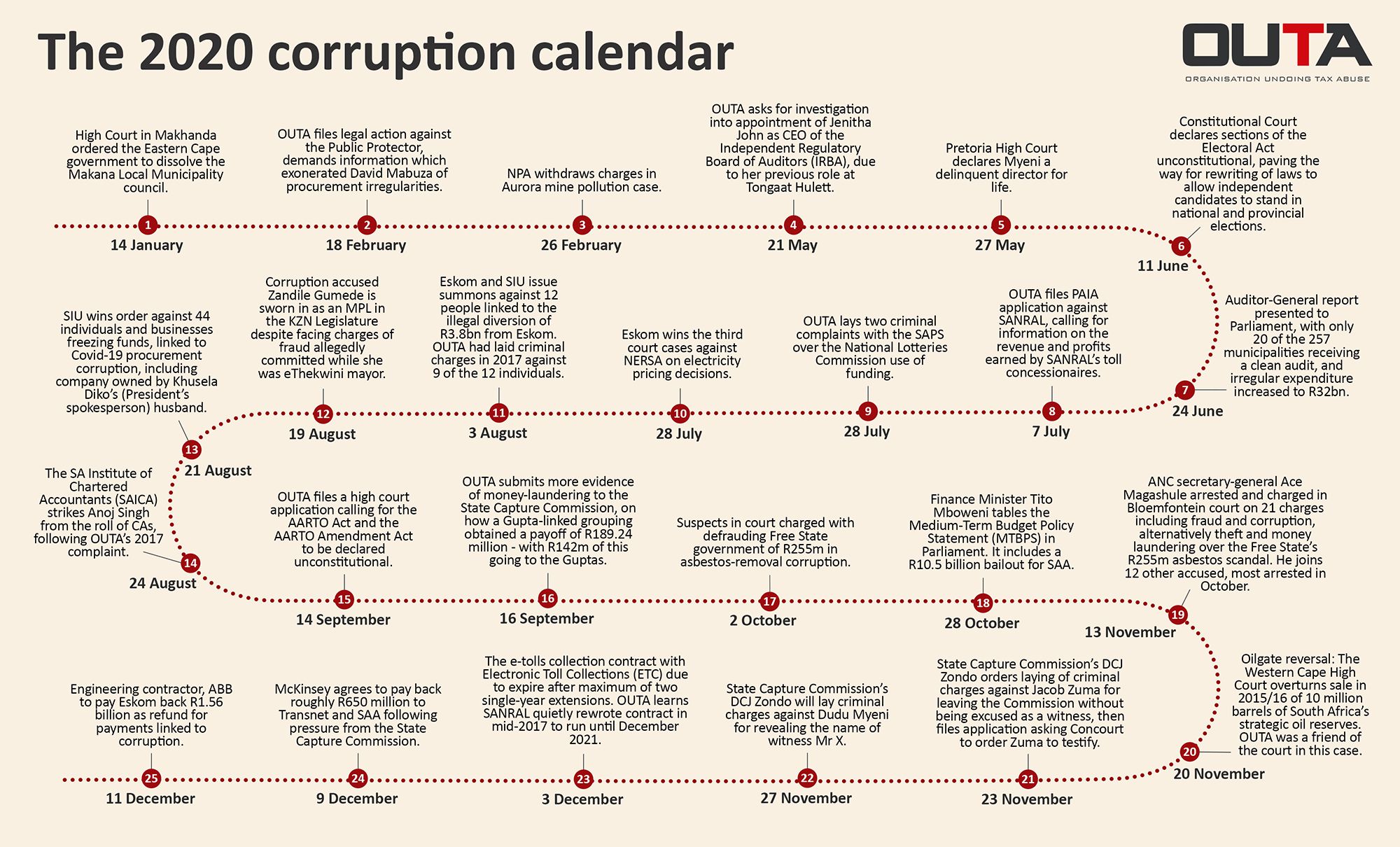 2020 saw the wheels of justice gather good momentum in the fight against corruption.
Below are some of OUTA's major highlights for 2020, we are looking forward to continuing the fight in 2021.

21 May - OUTA asks for investigation into appointment of Jenitha John as CEO of the Independent Regulatory Board of Auditors (IRBA), due to her previous role at Tongaat Hulett.

11 June - Constitutional Court declares sections of the Electoral Act unconstitutional, paving the way for rewriting of laws to allow independent candidates to stand in national and provincial elections.

24 June - Auditor-General report presented to Parliament, with only 20 of the 257 municipalities receiving a clean audit, and noting a R32bn increase in irregular expenditure.

7 July - OUTA files PAIA application against SANRAL, calling for information on the revenue and profits earned by SANRAL’s toll concessionaires.

28 July - OUTA lays two criminal complaints with the SAPA over the National Lotteries Commission use of funding.

3 August - Eskom and SIU issue summons against 12 people linked to the illegal diversion of R3.8bn from Eskom. OUTA had laid criminal charges in 2017 against 9 of the 12 individuals.

19 August - Corruption accused Zandile Gumede is sworn in as an MPL in the KZN Legislature despite facing charges of fraud allegedly committed while she was mayor.

14 September - OUTA files a high court application calling for the AARTO Act and the AARTO Amendment Act to be declared unconstitutional.

16 September - OUTA submits more evidence of money-laundering to the State Capture Commission, on how a Gupta-linked grouping obtained a payoff of R189.24 million - with R142m of this going to the Guptas.

13 November - ANC secretary-general Ace Magashule arrested and charged in Bloemfontein court on 21 charges including fraud and corruption, alternatively theft and money laundering over the Free State’s R255m asbestos scandal. He joins 12 other accused, most arrested in October.

23 November - State Capture Commission’s DCJ Zondo will lay criminal charges against Jacob Zuma after leaving Commission without being excused as a witness, and dismissed Zuma’s application for recusal.

9 December - Mckinsey agrees to pay back roughly R650 million to Transnet and SAA following pressure from the State Capture Commission.

Now you’ve got the money, pursue the criminal charges