Yesterday the State Capture Commission announced that McKinsey undertook to pay back about R650 million to Transnet and SAA. McKinsey has confirmed this, linking it to nine contracts involving Regiments at Transnet and one at SAA.

Last night Transnet noted that it has no knowledge of McKinsey’s undertaking to pay back anything and said that the parties are still in negotiations, particularly over the issue of interest. Transnet puts the claim at R688m plus interest of about R558m, a total of R1.2 billion. McKinsey makes no mention of such ongoing negotiations.

Although there are conflicting statements in the public domain, OUTA welcomes the undertaking from McKinsey to repay Transnet and SAA.

We would like to see clarity on the final amounts and how they are calculated, due to the discrepancies, and we expect this arrangement to be transparent so the public can see what is being repaid. We believe that such payments should include interest, as this is part of profiteering from state capture.

We also expect that such repayments will apply to any other SOEs which McKinsey received funds from where there is a suspicion of irregularities or corruption.

McKinsey is now due to give evidence at the State Capture Commission.

We urge its officials to tell the whole truth.

It is important that entities like McKinsey must be truthful and committed to come clean. This means not only repaying revenue from questionable contracts, but also revealing to South Africans how these relationships with companies and individuals like Regiments, Trillian, Salim Essa and the Gupta family came about. It is one thing for a company like McKinsey, which is billions of dollars strong, to pay back looted funds, but it is also just as important to tell the State Capture Commission who the individuals and entities involved were and how the money flowed. This is important for understanding and combatting the roots of state capture.

We would like to hear about the involvement of McKinsey’s Vikas Sagar, as we believe he played an important role.

We would like to hear more about the special relationship which McKinsey had with Transnet and Eskom’s former CFO, the disgraced Anoj Singh. McKinsey arranged for Singh to attend the 2012 CFO Forum conference in London from 8 June 2012 to 16 June 2012 and helped with arrangements for Singh to meet with financial institutions in Dubai. In 2013, McKinsey again sponsored Singh to attend the 2013 CFO conference in London. Singh departed from Johannesburg on 12 June 2013 and returned on 24 June 2013. During this trip, Singh also visited Dubai and Russia.

Vuyisile Kona, who was SAA’s acting CEO in 2012, told the Commission that the Guptas offered him R100 000 and later R500 000 to award an SAA consulting contract to McKinsey instead of Lufthansa; he refused and was later suspended by then SAA chair Dudu Myeni (now declared a delinquent director). This shows that McKinsey definitely had a relationship with SAA, and we believe it is crucial to uncover this fully.

How much did McKinsey make off Transnet?

The Commission and McKinsey put the total to be repaid to both Transnet and SAA at about R650m.

OUTA believes that the amount McKinsey should repay on Transnet alone is higher than the R650m total.

OUTA’s investigations revealed that McKinsey received a total amount of R1,136,095,028 (R1.136 billion) in fees from Transnet.  This included R917,531,518 (R917m) in some kind of partnership with Regiments: this appears to be the funds which McKinsey undertook to repay, according to the statements by the Commission and McKinsey.

The table below shows the contracts and payments received by McKinsey, Regiments and Trillian on “services” delivered to Transnet. OUTA believes that these are the amounts – plus interest – which should be repaid to Transnet.

OUTA supports the State Capture Commission’s call to all companies who entered into business with the state and the SOEs to come clean and, if implicated in state capture and corrupt contracts, to pay back the money they received. We expect to inputs to the Commission from companies like KPMG, SAP, Neotel, T-Systems, Bain & Co, PWC and Bosasa in this respect. 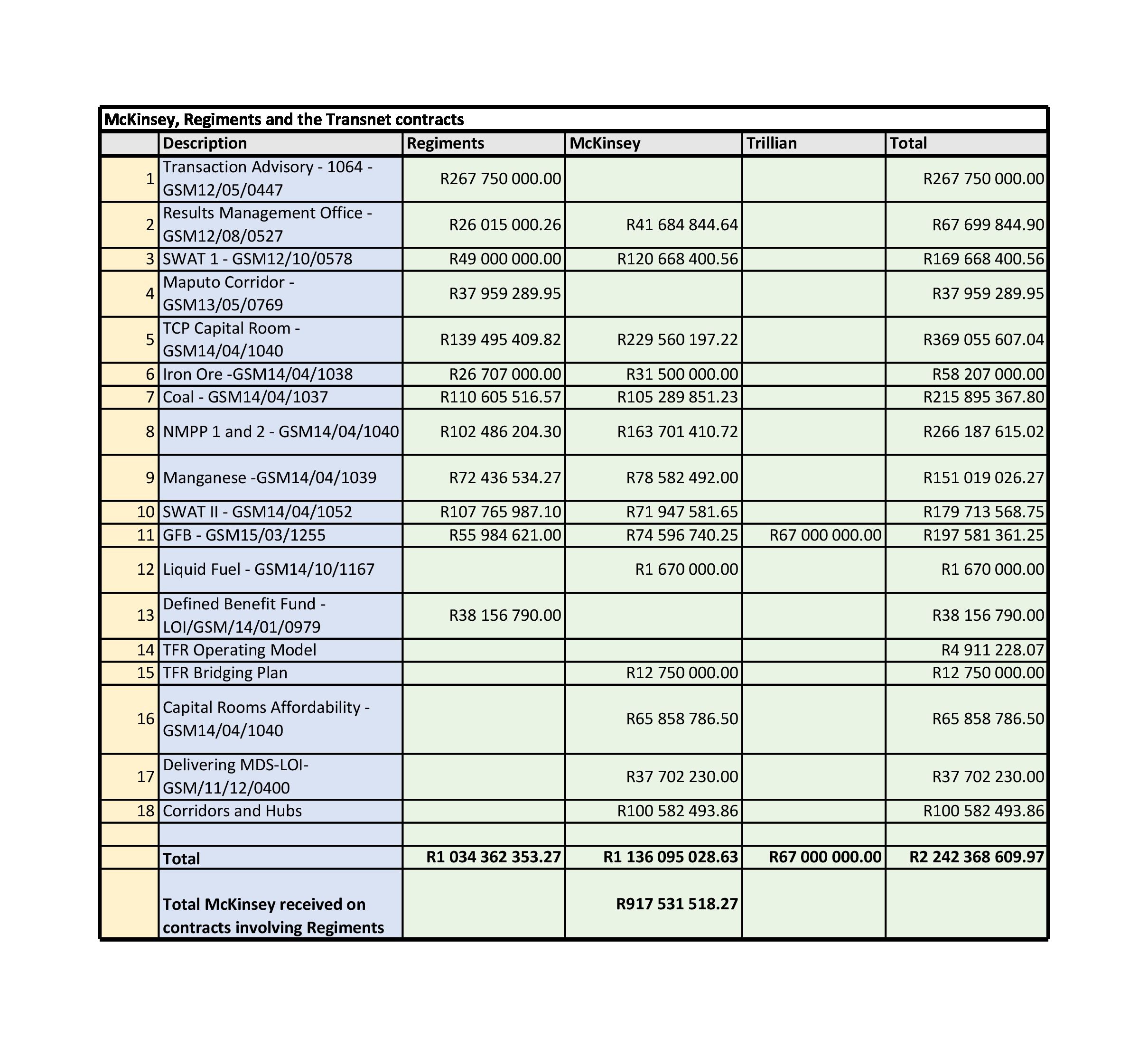 A soundclip with comment from Rudie Heyneke, OUTA's Portfolio Manager for State Capture, is here.

International Anti-Corruption Day calls for citizens to unite against the corruption pandemic.