This is who really funds political parties: you, the taxpayer

OUTA exposes how taxpayers have paid R13.882 billion directly to political parties in the 13 years since 2009

This is who really funds political parties: you, the taxpayer

OUTA exposes how taxpayers have paid R13.882 billion directly to political parties in the 13 years since 2009, which is eight times more than the more widely known funding through the constitutionally authorised Represented Political Party Fund, and helps them to retain power

Political parties with seats in Parliament and provincial legislatures are voting themselves billions of rand in extra subsidies, effectively entrenching themselves in power and disadvantaging any new parties.

The Constitution intends state funding to enhance multi-party democracy, but the manipulation of huge amounts of additional funding by the very institutions required to safeguard democracy – the national Parliament and the provincial legislatures – effectively undermines the election of candidates from new parties.

The Represented Political Party Fund (RPP Fund) is the official publicly funded support for parties, funded through the Home Affairs vote and run by the Electoral Commission. This fund has been running for years. Less well known is that there are 10 more funding streams paying hundreds of millions of rand directly into party accounts: from Parliament’s own budget vote and from each of the nine provincial legislatures.

There is very little accountability for the extra funds.

The funding is not secret, but there is very little transparency around it.

None of the Parliament or legislature funding is declared in the new Electoral Commission funding reports.

This is what taxpayers have funded

Another R2.890 billion is pencilled into the budgets to cover the next two years. If that funding goes through, the parties will have collected R16.773 billion over the 15 years from 2009/10 to 2023/24. This is the full period for the fourth, fifth and sixth Parliaments.

We were not able to establish how much each party received, but the bigger parties will have received the most, as funding is distributed according to representation in Parliament and legislatures.

All parties which have held seats in the national and provincial legislatures during those years have benefitted. All the funding was approved in the annual budgets, voted on by the MPs, NCOP delegates and MPLs whose parties are the beneficiaries.

The funding for 2021/22 illustrates the extent of the extra funding.

The RPP Fund provided parties with R166.812 million to share.

Parliament and the legislatures added more, taking the total allocation to R1.421 billion (including the RPP Fund) or eight times the RPP Fund total.

How the funding is justified: The myth of constituency work

Parliament and the legislatures justify their funding by calling the bulk of it “constituency support” and parties are required to report back on their use of this funding.

However, it is not clear whether those very expensive constituency offices function or even exist. OUTA was unable to find a comprehensive list of these offices which taxpayers fund.

Parliament’s own website is outdated and contains very little about constituency offices or their performances.

A few years ago the Joint Standing Committee on the Financial Management of Parliament was tasked to develop a system to assess constituency office performance, but this has not been done.

In October 2020, OUTA asked Parliament and the parties’ Chief Whips for constituency office details but received no help from Parliament, and received lists only from the ACDP, AIC, FF Plus, UDM, Good, AL Jamah-ah, and IFP. Lists from the ANC, DA and EFF have not been forthcoming. One of the smaller parties, AL Jamah-ah, said there was no monitoring by Parliament of the spending or their constituency offices.

If Parliament hopes to gain the trust of the people and improve the services culture, it should be able to respond to this opportunity, but parliament’s feedback aspect is one of the weakest tools and require improvements.

The funding we tracked is all direct transfers to political parties.

This excludes funding by Parliament and legislatures for politicians’ travel costs, plus some extra funding for additional administration costs.

The funding was tracked through the National Treasury’s records of national and provincial budgets, including spreadsheets, and through the annual reports of Parliament, the provincial legislatures and the Represented Political Party Fund.

It wasn’t possible to establish how much each party received, as these records are inadequate.

As a result of an application in terms of the Promotion of Access to Information Act (PAIA), we recently received some of the audited party financial statements submitted to Parliament to account for the parliamentary stream of funding. We are still assessing this information.

We regard this funding as an aspect of state capture, due to its size, the lack of transparency around it, and because it significantly increases the financial strength of represented political parties.

One fund was not enough: The 11 funding streams

The publicly known funding for political parties runs through the Represented Political Parties Fund (RPP Fund), set up under the Political Party Funding Act of 2018 (the update of the 1997 law) and administered by the Electoral Commission (IEC). The RPP Fund receives an annual allowance from the fiscus, through the Home Affairs vote.

These are the 10 extra funding streams

Parliament uses its own budget to fund parties. Crucially, Parliament’s vote entry in the annual Budget excludes all the detail of spending on programmes which is standard in other votes. This effectively conceals the funding to parties; however, this information is in the budget spreadsheets and Parliament’s annual reports. Parliament’s R490 million subsidy in 2021/22 for political parties is bigger than the annual budget for these important state entity votes: the National School of Government (R215m); Planning, Monitoring and Evaluation (R461m); Public Enterprises (R298m); the Public Service Commission (R285m); Traditional Affairs (R180m); the Civilian Secretariat for the Police Service (R151m); and the Independent Police Investigative Directorate (R358m).

The provinces: All nine provinces fund political parties. At least seven provinces have passed their own provincial laws to fund represented political parties (Eastern Cape, Free State, Gauteng, KwaZulu-Natal, Limpopo, Northern Cape and North West), despite the Constitution requiring that this be done through national legislation; the Political Party Funding Act (and its predecessor) is that national legislation. Those provincial laws were later repealed in three provinces (Eastern Cape, KZN and North West) and a repeal bill for Gauteng is in the works, but funding continues in those provinces, with the Eastern Cape still justifying it in terms of its long-repealed law. Gauteng’s repeal bill memo says the repeal is necessary because of “some misgivings on the constitutionality of this Act”.

Are the extra funding streams legal?

This funding appears to be legal, although there are some questionable aspects.

In terms of the Constitution, the Financial Management of Parliament Act and the Political Party Funding Act, both Parliament and the provincial legislatures may provide financial and administrative assistance to political parties. There is no indication of how much funding might be reasonable.

This funding is not regarded as “donations” and is not declared to the Electoral Commission. The 2018 law blocks government departments and state entities from funding parties, but Parliament and the legislatures are not departments or entities.

The PPF Act definition of “donations” excludes funding to the parties from the National Assembly and provincial legislatures in terms of sections 57(2)(c) and 116(2)(c) of the Constitution, which allow “financial and administrative assistance” to each party represented in Parliament or the legislatures “to enable the party and its leader to perform their functions in the Assembly [or legislature] effectively”.

While this would seem to cover certain administration, travel and communications costs in those legislatures (travel is funded separately and some other costs are also funded in addition to these transfers), the parties have defined this as allowing substantial direct transfers to their parties themselves.

The PPF Act also says that funding by Parliament and legislatures must be in line with section 34 of the Financial Management of Parliament and Provincial Legislatures Act of 2009 (now known as the Financial Management of Parliament Act). Section 34 says the executive “must” make regulations “concerning the allocation and use of any funds provided by Parliament to political parties or to Members of Parliament”, and that these regulations must include requiring accounting for the spending. However, no such regulations appear to exist although it is more than a decade since that Act was passed. This raises further queries over the legality of such funding.

Accounting for the funds

All the funding streams have some requirement for parties to report on spending, some more vague than others. But the reality is that the public sees almost none of this.

There appears to be little if any accounting for the funds provided by Parliament and the legislatures, and there is not even clear reporting on how much each party receives.

Whatever reporting back there is on spending is out of the public eye. It is also not clear how parties would be blocked from using the same expenses to account to separate legislatures for different funding streams.

The enormity of the public funding for parties raises questions of how a major party such as the ANC could take this funding every year, but fails to honour its tax commitments to SARS by reportedly failing to hand over employee PAYE deductions.

And that’s not all

This may not be the full amount of the funds which went through this system to the represented parties.

Under the new national party funding law, some of those donations may be illegal, as the national law prohibits donations from foreign governments or their entities. None of the provincial funding laws include that bar.

OUTA wants to see clear public accountability for these funds.

We believe this is far more funding than the parties should be getting, and it should be substantially reduced.

We want to know what this money is spent on.

Unaccounted for money should be repaid to the fiscus.

Annexure B of the report is available as an Excel spreadsheet here.

A soundclip with comment from OUTA Parliamentary Liaison Officer Christopher Scholtz is here. 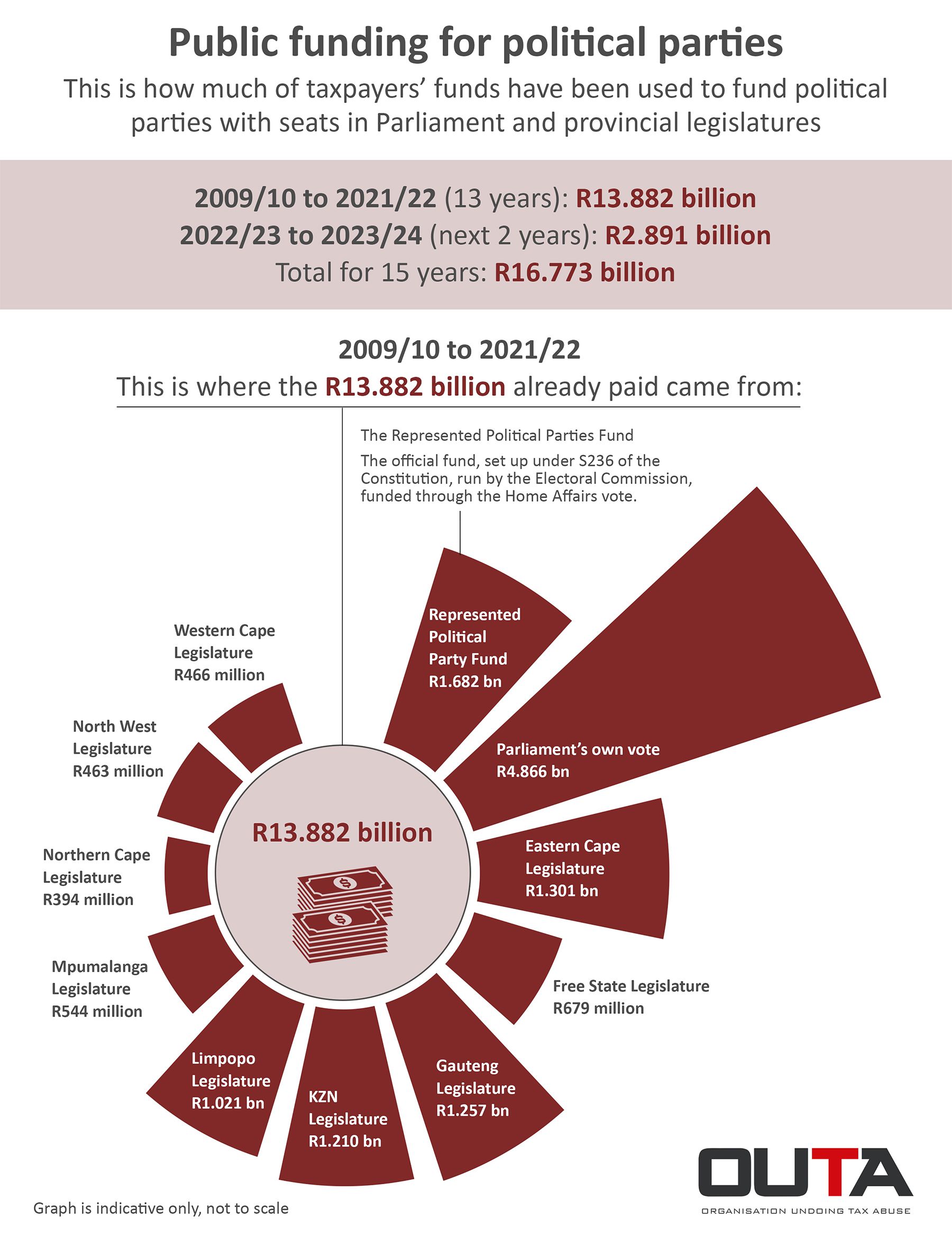 Concerns over rot in Cabinet and Department of Health’s leadership