OUTA welcomes today's judgements that President Jacob Zuma must personally pay the costs of his failed attempts to stop the Public Protector’s State of Capture report and manipulate the inquiry she recommended.

“For too long the President has used public funds to fight his personal battles, abusing his authority and turning against his oath of office at the expense of South Africans. It appears that the judiciary has seen through this strategy and is now calling a halt to this,” says Ben Theron, OUTA’s Chief Operating Officer.

“Neither the courts nor public funds are meant to be abused. Taxpayers’ money should be used to provide services to the South African public and not to enrich the Zuma power elite.”

Not only must the President personally pay the costs of two legal actions arising from his attempts to frustrate the report and the commission of inquiry it recommended, but the long-awaited, independent inquiry into state capture must now be appointed.

Zuma had tried to stop the release of the report, in what was a blatant delaying tactic, and retain the power to appoint the judge who heads the inquiry. He lost on all fronts. Theron called the State of Capture report a crucial legal basis for the allegations of the President’s involvement in state capture with his friends the Gupta family.

On the President’s opposition to the release of the report, Judge Dunstan Mlambo of the Pretoria High Court said a simple punitive costs order was not appropriate as this would make the taxpayer liable for the costs. “The conduct of the President and the context of the litigation he initiated requires a sterner rebuke,” said Judge Mlambo, referring to “objectionable conduct” by the President and his attempt “to stymie" the Public Protector's consitutional obligations.

In the second judgement, the same court found that the President cannot himself appoint the judge to handle the commission of inquiry but must within 30 days appoint a judge selected by the Chief Justice.

Today’s landmark decisions follow Friday’s judgement, also by Judge Mlambo,which also went against the President, and which referred to the President’s delaying tactics to frustrate any case against him. That matter cost both Shaun Abrahams and his predecessor Mxolisi Nxasana the job of National Director of Public Prosecutions and blocked Zuma from appointing the replacement as he is conflicted due to the looming criminal charges against him. It called the President’s actions as “reckless and unreasonable”.

The Organisation Undoing Tax Abuse (OUTA) hopes that these three judgements will now encourage genuine action to overcome state capture, with an independent full judicial inquiry into state capture and the appointment of a chief prosecutor who will clean up the National Prosecuting Authority and get the much-delayed state capture cases underway.

“These judgements are about the President’s attempt to frustrate criminal investigations against him over state capture and corruption. They are about ensuring that the President is equal before the law and removing the powers he is abusing to manipulate the legal processes against him,” says Theron.

“South Africans long for this President to be held accountable for his conduct and those who have looted the state with him will face justice soon.” 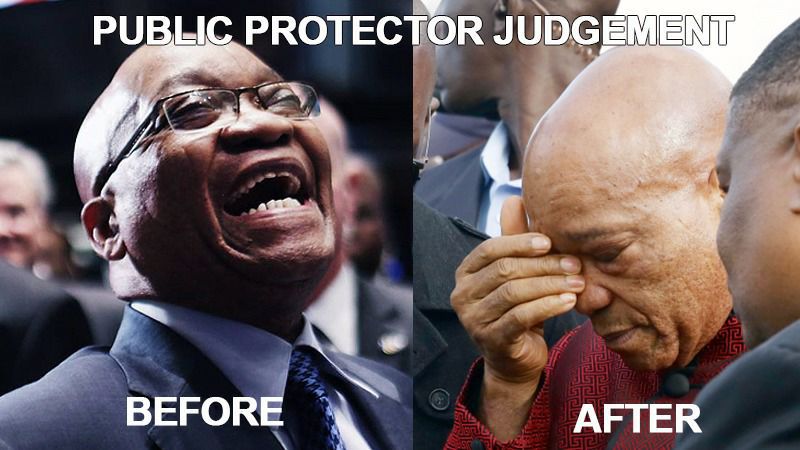 OUTA salutes South Africans for their unprecedented participation in the public process which helped cut Eskom’s tariff increase down to 5.23%