Two local factors that contribute to our current high fuel prices are the weak value of the rand – which we put down largely to poor government economic policy and management of our fiscal affairs – and our government’s incessant desire to increase taxes on motorists though fuel-related levies over the years, says OUTA CEO Wayne Duvenage.

Of course, the recent price of Brent crude of $83.40 per barrel is an external factor that is out of our control, which has increased by around 70% since January’s price of $49.20, and has a major impact on the price of petrol in South Africa.

However, a decade ago the international price of oil was significantly higher than it is now. A decade ago in November 2011, Brent crude was $109 per barrel, some 31% higher than it is today. Fortunately for us at the time, the rand was a lot better off at R8 to the US dollar, compared to today’s exchange rate of R14.72 which is some 84% higher. If we had the same rand/dollar exchange rate today, the current petrol price would be around R16.00 (i.e. roughly R3.50 lower) per litre of 95 octane petrol (inland price). This is the price of a weaker currency.

These two factors (a weaker rand and higher cost of oil) have seen the basic fuel price (BFP) component of our petrol price move from R6.29 per litre for 95 octane petrol (inland), which was 58% of the price of petrol of R10.77 a litre a decade ago, up to R9.37 per litre (48% of the current price of R19.47). This component has therefore increased by 49% over the past decade, despite the fact that our currency cost is 84% higher than it was a decade ago. However, despite the higher BFP component, our concern should be focused on the 126% increase in the various levies and taxes applied over the past decade.

In November 2011, the combined cost of the General Fuel Levy, the Road Accident Fund (RAF) levy and other levies amounted to R4.48 of each litre of 95 octane petrol. That amount today is R10.10, some R5.62 (126%) higher than a decade ago. This is indicated in the table below, which gives us an indication of the impact these levies on petrol prices over time.

OUTA maintains again, as it has on numerous occasions, that the state has pushed the envelope on fuel levy increases too far and should seriously consider pulling back on seeking additional tax revenue.

Furthermore, the current fuel tax revenues the state relies on – in particular the General Fuel Levy (around R88bn per annum) and the RAF levy (around R45bn) – will come under significant pressure over the coming decade, as the transition to electric vehicles becomes a reality. The state will be hard pressed to replace these revenue streams though other mechanisms and should seriously consider zero increases to fuel levies going forward, whilst exploring innovative ways to increase efficiency and reduce reliance on these levies.

A soundclip with comment by OUTA CEO Wayne Duvenage is here. 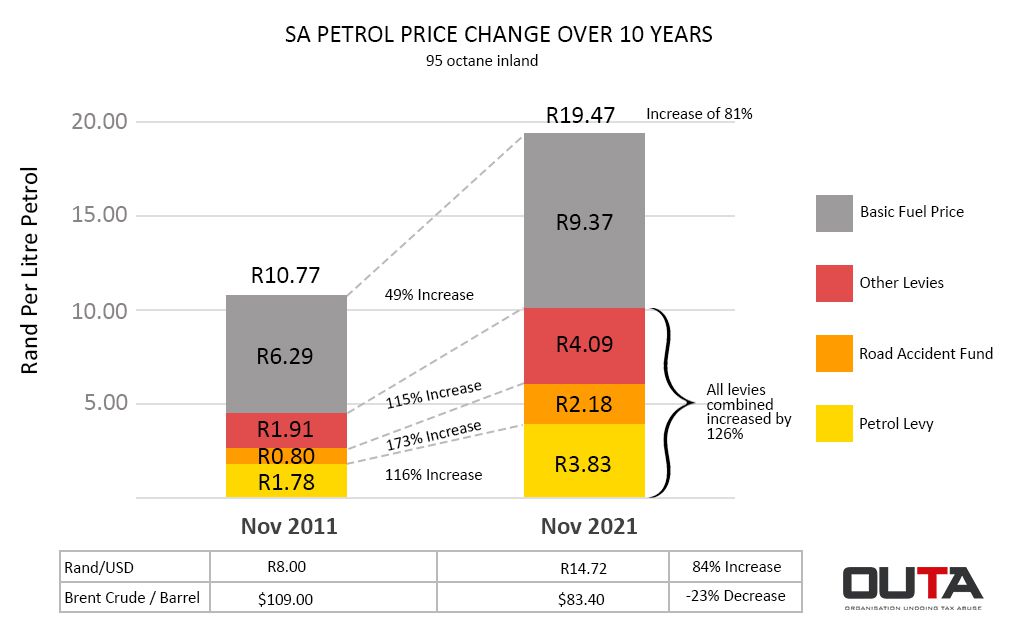 OUTA wants NERSA to set up a longer public consultation process, with greater transparency on electricity supply costs and more expert input, to ensure that these crucial rules on pricing are fair, appropriate and support economic growth