“These carrots have been tried before and they failed dismally,” says Wayne Duvenage OUTA’s CEO. “In 2015/16, SANRAL offered a 60% discount along with a payment plan to those who had defaulted during the first two years of operation, which had the impact of raising less than 2% of the outstanding e-toll debt and a continued decline in the compliance levels thereafter.”

What ETC fails to comprehend is that the scheme is unfit for the purpose of settling the GFIP bonds for a number of reasons, the most significant of which is that they have lost the support of the people. Offers and carrots of this nature signify their ignorance of the intellect and will of the public. The public will not accept that SANRAL presented the ETC five year tender as being won at a cost of R6,2bn, while the contract was signed at R9,9bn. They also still seek answers as to why SANRAL paid R17,9bn for the GFIP upgrade when sufficient research shows this to be grossly overpriced by around double the value.

“ETC is both delusional and desperate if they believe the public will fall for this carrot, if indeed it is ever introduced,” added Duvenage. “It is obvious that they are unable to learn from their past mistakes and continue to ignore that the public refuse to participate in a grossly irrational, inefficient and expensive scheme that seeks to lumber them with the odious debt of overpriced roads and tendered administration costs.”

In OUTA’s opinion, it is not even ETC’s place to make these ludicrous proposals, as their days are short-lived due to a very limited extended contract period. Furthermore, discussions on alternatives still need to be held and then there is the matter of a test-case court challenge in place, whereby over 2,000 SANRAL summonses are being attended to by OUTA on behalf of the public. Unfortunately, this legal challenge has been unnecessarily delayed by SANRAL and is a matter that cannot be ignored or wished away by them. 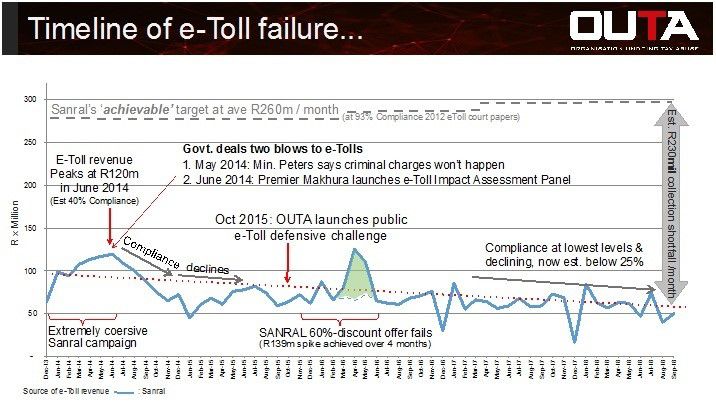 OUTA has written to MEC Paul Mashitile and the Provincial Executive, calling for decisive action in the ELM service delivery crisis.