A few key developments in recent weeks have raised hopes that the tide may finally be turning against rampant corruption, maladministration, the lack of accountability and even cadre deployment. Pressed by civil society and South African citizens at large, there are signs that government (or at least some members of government) is at last heeding the pressure and taking steps to stop the rot and clamp down on corruption.

When the minister of defence and a delegation of ANC leaders decided to fly to Zimbabwe in an SANDF jet, opposition parties, OUTA and other groups raised a red flag. After initially trying to justify the trip and delegation as “state business”, an embarrassed ANC leadership changed tack and announced that the party will reimburse the government for the travel costs. But that’s not the end of the road on this issue, and OUTA is calling for the minister’s axing.

The redeployment of former eThekwini mayor and corruption-accused Zandile Gumede as a member of the Provincial Legislature sparked a huge backlash (see separate article), particularly as President Ramaphosa had only days earlier talked tough on corruption and measures to bring perpetrators to book. The outcry prompted the KZN ANC to ask Gumede, along with Provincial Deputy Chairperson Mike Mabuyakhulu, who also has a tender corruption case against him, to step aside.

Andile Lungisa, ANC Nelson Mandela Bay councillor and former ANC Youth League deputy president, has been sentenced to three years in prison for assault with intent to do grievous bodily harm. He is appealing the sentence, but has run out of wiggle room as well as “friends” who previously may have supported him and succeeded in fudging the issue.

Treasury Director-General Dondo Mogajane is pushing back against unions on the public sector wage increases. Citing dire government finances, Mogajane is refusing to grant public sector salary increases, as these would inflate the country’s debt and hurt an already-crippled economy. “No holy cows in state budget” was the theme of Treasury’s report.

Following Auditor-General Kimi Makwetu’s horrifying (but unsurprising) report recently delivered to parliament on the audit outcome of South African local government entities, municipalities and municipal entities, it seems some issues will be investigated by the public protector and the National Prosecuting Authority.

The ANC has instructed several of its leaders to face its Integrity Commission as part of the president’s stated claim to investigate state-capture corruption and the more-recent awarding of tenders for COVID-19 personal protection equipment (PPE), with the Special lnvestigating Unit (SIU) now issuing summonses against former Provincial ANC appointees.

Raymond Zondo, presiding judge for the Commission of Inquiry into State Capture, has upped the ante by taking the once protected Zuma head-on with his no-favours statement that the ex-president will be summonsed to appear before him.

WHAT TO MAKE OF THESE DEVELOPMENTS?

While these developments (and others not mentioned) are not the “big catches” and actions of justice that we want to see, they do signal a change in direction and the proverbial line being drawn in the sand; the purveyors of corruption and maladministration may soon be held to account.

The message in the picture being painted here is that South Africans have realised the impact of our long history of political indulgence and corruption in our country’s decline, now fast tracked by the gross abuse of relief funds in a time of crisis. It’s easy to overlook these developments, but the abovementioned actions were not possible, let alone heard of, under the decade of Zuma’s rule. 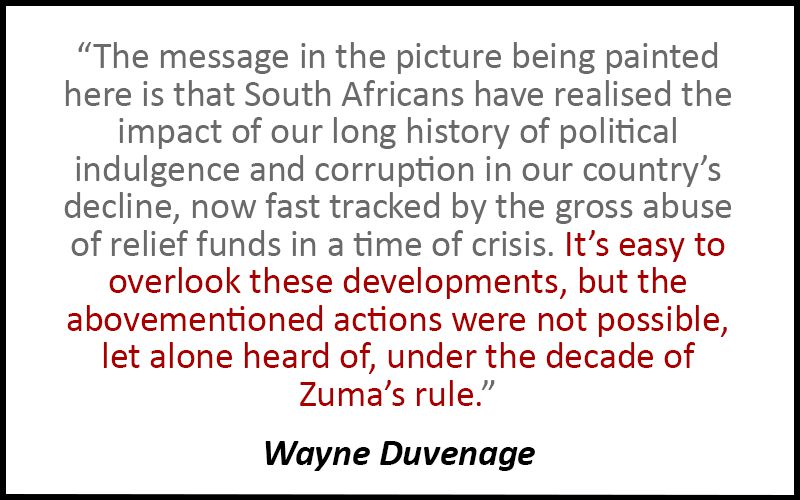 The message in the picture being painted here is that South Africans have realised the impact of our long history of political indulgence and corruption in our country’s decline, now fast tracked by the gross abuse of relief funds in a time of crisis. It’s easy to overlook these developments, but the abovementioned actions were not possible, let alone heard of, under the decade of Zuma’s rule.

In South Africa’s backdrop of political powerplays, there is no silver bullet in tackling the scourge of corruption. Unfortunately, our solution will not simply be a “flick of the anti-corruption switch”. Instead, it calls for the pulling and strengthening of two golden threads that tie the anti-corruption journey together: accountability and transparency.

The events now unfolding depict the forces of accountability and transparency coming to the fore, slowly and cautiously outwitting the morally bankrupt elements within as the journey unfolds and quickens in pace to expose, minimise and defeat the scourge of corruption.

Unlike many countries that have to tackle decades of corruption, we are blessed with a good set of rules, laws, a renowned constitution and mechanisms already in place to fight this fight. I truly believe our patience will be rewarded, but let us not rest on our laurels, for it is the relentless pressure of civil society that is taking us forward. It is this pressure that will ensure the president remains true to his word of rooting out corruption and dealing with the corrupt.

There is clearly a lot more work to be done and the Zondo Commission will no doubt add to the list of people and incidents to be investigated. While that work unfolds, along with the strengthening of the NPA, Hawks and other law-enforcement bodies, we at OUTA remain focused. We are aware that the momentum is now moving in the right direction. Our eyes remain on the goal to ensure that politicians (and businesspeople) who are guilty of having a hand in the cookie jar must be held accountable and, in time, put behind bars.