THE NEED FOR, AND CONSEQUENCES OF, WHISTLEBOWING

In OUTA’s recent OUTA for Lunch webinar, headlined Whistleblowing - The Blessing and the Curse, CEO Wayne Duvenage hosted a panel comprising journalist Mandy Wiener, ex-SAA general treasurer and whistleblower Cynthia Stimpel, and Advocate Alison Tilley. The discussion included ways in which civil society, with the help of private business and the media, can better support and protect South Africa’s whistleblowers.


Whistleblowing: should I, shouldn’t I?

In her latest book, The Whistleblowers, Mandy Wiener details the negative outcomes faced by those who expose corruption. “In most of the cases I look at in the book, [the result of whistleblowing] has been a good outcome for the country – money has returned to the fiscus, or companies have been held to account. But for the individual who comes forward, the result hasn’t always been positive,” she reflected. A potential whistleblower must prepare for physical and verbal intimidation, job loss, financial hardship and community ostracisation.


Since blowing the whistle on a corrupt SAA deal worth R256-million in 2016, Stimpel has struggled to find work, despite her qualifications and years of experience. Many companies in the public and private sector see those who expose wrongdoing as difficult, despite the fact that they place integrity above their own emotional and financial wellbeing.

Tilley called for a comprehensive response to whistleblowing, one that will go beyond legal assistance – although that is critical. She suggested expanding workplace remedies with financial reward that the whistleblower might use to relocate, pay for therapy or support themselves and their family in case of job loss, for instance.

Another solution is a “whistleblower house”, suggested Wiener. As a Chapter 9 institution, the whistleblower house would be funded by government, yet completely independent. It would provide all that a whistleblower needs to endure the traumatic aftermath of exposing a crime: legal support, security and psychological counselling. Tilley argued that such an institution should be wholly supported by civil society for it to be safe from political interference and government neglect.


The role of business

Most businesses do “the absolute minimum” when it comes to fighting corruption, said Tilley, in the form of corruption hotlines. Wiener added that hotline tip-offs often result in witch hunts, meaning whistleblowers are so concerned with remaining anonymous, they don’t hand over enough information for an investigation. Instead of hotlines, businesses should put money into external civil society institutions formed to investigate corruption and offer whistleblowers protection. 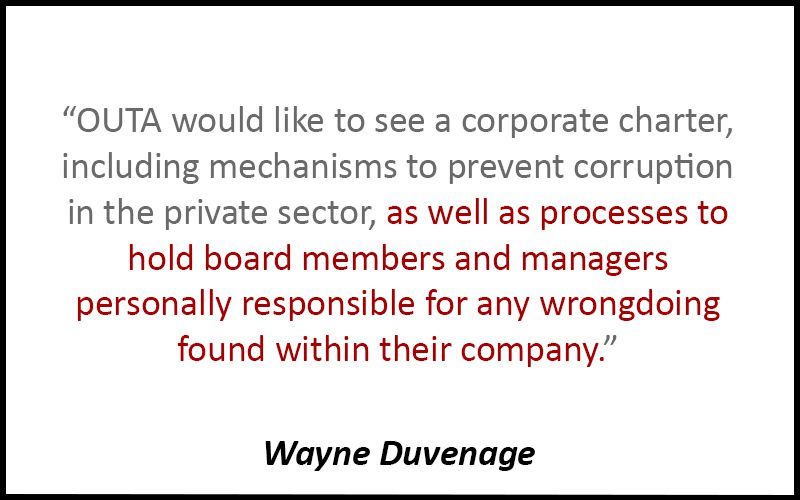 For more on this important topic, and also to hear about whistleblowers and the media, click  here  to watch the webinar.