WHEN IN DOUBT, READ THE MANUAL 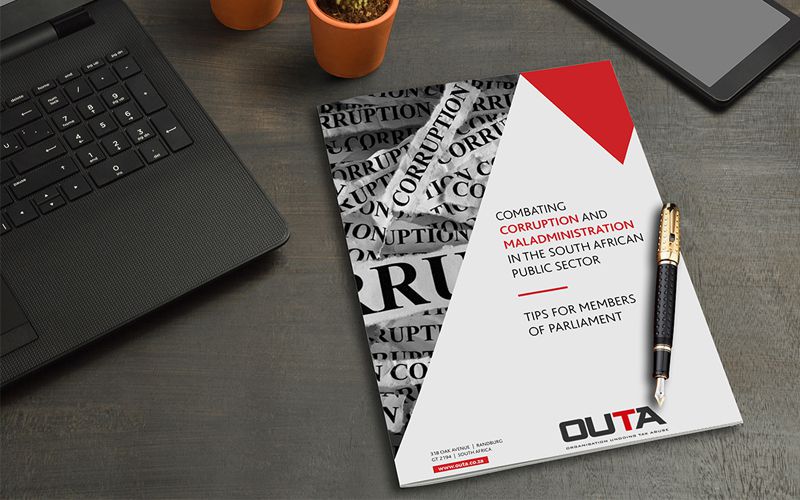 When taking office, all Members of Parliament (MPs) take an oath to defend the public by ensuring effective oversight of government. Sadly, once in office, some MPs seem to forget or ignore this pledge, which is how we ended up with “nine wasted years” and over R1.5-trillion of stolen or wasted taxpayers’ money.


One would think that MPs know what it means to practice ethical behaviour and leadership. Clearly that’s not the case, which is why OUTA has decided to produce and disseminate a publication titled, “Combating Corruption and Maladministration in the South African Public Sector: Tips for Members of Parliament”.


Matt Johnston, OUTA Parliamentary Engagement Officer, says the publication provides a framework for MPs to provide ethical leadership and use their positions in parliament to combat corruption and ensure good governance.


“Good governance and efficient spending in the public interest must be enforced by the institution that is elected by and for the people, namely parliament. This is ultimately where the buck stops when political figures are involved in maladministration, corruption, incompetence and gross negligence of duty.”


Since OUTA opened our Parliamentary Engagement office in Cape Town in 2017, we have gained valuable insights in our efforts to help build a parliament that is effective, transparent and inclusive. Matt expands: “By observing deliberations and behind-the-scenes decision making in parliament’s meeting chambers and corridors, we’ve seen that parliament does not adequately serve the people. There are serious shortcomings, including a lack of strategic planning sessions and internal performance evaluations, which impacts MPs’ ability to ensure oversight of government departments and state-owned entities.”