How dare civil society be so bold as to question the rights and decisions of those in authority when spending public funds in the way they do. The people should shut up, sit down and stop complaining.


I’m both amused and somewhat saddened (no longer shocked) by the evasive and often vitriolic reaction to criticism of Government conduct, especially when the reasons and need for critical thinking is so glaringly obvious.


True to character, the denial and defence of unacceptable conduct by Governing authorities and their agencies is spin-doctored away by shooting the messenger, or deflecting the real and substantive issues with a deft display of ostrich mentality... if we ignore the problems for long enough, they must surely disappear.


Taking a look at just one graph helps us to understanding of the gravity of the situation that I’m speaking about. Herein lies the mind-set of those who manage or operate within the space of our municipal financial affairs.


The graph below displays the percentage of three main categories of financial hygiene and discipline, displayed over a 5-year period by our municipalities and metros, as determined by the office of Auditor General (AG). The real issues however go well beyond the concerning picture portrayed in the graph. 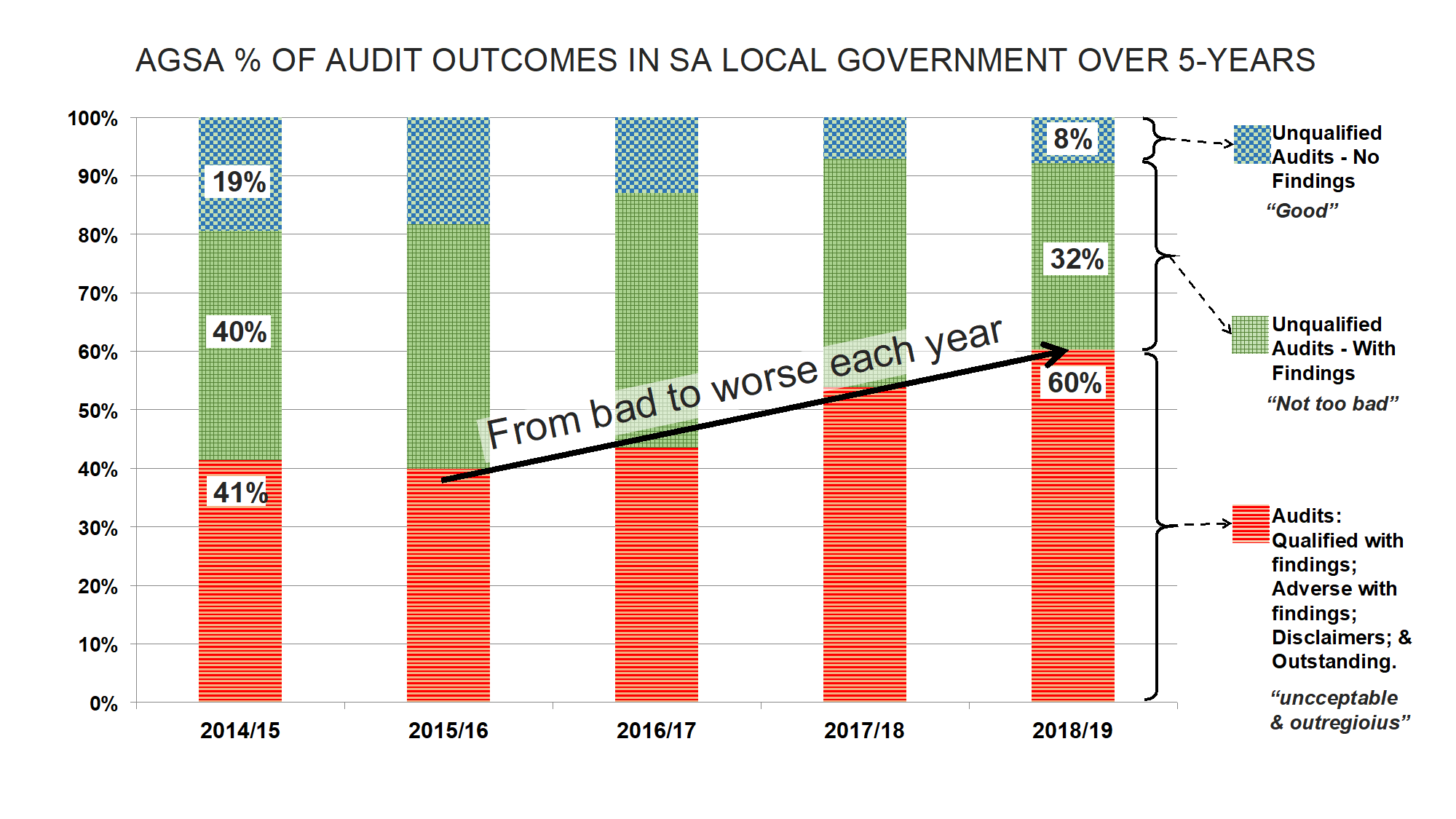 At best over the past five years, a mere 19% of our municipalities achieved “unqualified audits with no findings.” In the world of good performance when it comes to managing an organisation’s money, this figure should be at 90%. And in the business world, those CFOs and Executives who produce qualified audits with findings are generally fired.


For some strange reason it’s quite the opposite in South Africa’s local government environment. Dismal performances by the accounting authorities are deemed acceptable, as is witnessed by that fact that the dire situation since 2016 has not been addressed and simply got worse year after year, with virtually no-one being held accountable.


Today only 8% of municipalities achieving a clean audit, with 60% of them receiving qualified audit outcomes – i.e. totally unacceptable. The other 32% of municipal financial audits languish in the “not good but acceptable” category of financial management and sadly, these are getting worse by the year, not better.


The audit of an organisation’s financial affairs is the ultimate measure of respect shown by those entrusted with shareholders funds. In the case of local Government, society must read this grave situation as 60% of our municipalities couldn’t give a damn about how they spend the funds of their rate-payers.


Worst of all, those in authority who occupy the oversight roles and functions within Local Councils, Mayoral chambers and Provincial MEC’s do little about it and still ignore the problem to this day. Some will have noted and commented on the concerns highlighted in the various AG reports, but this was nothing more than lip service.  They ought to have hung their collective heads in shame. Their efforts were supposed to trigger meaningful correction of the decay in our municipalities, but instead they are part of the problem.


It’s not difficult to ascertain why some municipalities of similar size perform better than others. Excellent research abounds on effective interventions required to address low performing municipalities. Had the authorities and their supportive agencies started in sincerity to fix the situation in 2015, guess where the state of our municipalities might have been today?


Yet things have got worse. Of course numerous talk-shops were held and grandiose plans were tabled, with millions spent on consultants to find the solutions they spoke of. Year in and year out the decline continued and the municipal coffers began to run dry. Electricity and water began to flow less frequently in many towns and the number of incidents of potholes and water / sewage leaks grew as preventative maintenance was set aside for tenders that scored big time for connected cronies, and less so for residents and communities.


Despite all the good laws, the oversight positions and bodies at our disposal, the latest AG report of June 2019 tells us that those in charge just don't care anymore.  Each year the AG report produces a case of déjà-vu, just worse.  Aside from a gasp of discontent here and a statement calling for action against perpetrators there, nothing really changes. The administrators and accounting officers who paid millions for service that were never even delivered on their watch, are still employed or walking the streets as free citizens.


But rest assured, they will call loudly to increase the salaries of their councillors. They will justify bonuses to be paid at year-end. They will give excuses for the failure to discipline the hundreds of people that ought to be fired or even charged and locked up for grave wrongdoing.


Yes, another imbizo or two will be held, at which much talk and pondering will seek to lend credence to their concerns of the decay that took place under their watch. They will explain portions of the glaring issues away and will ignore research and suggestions by civil society or academic institutions that have many of the answers they seek.


In the end, they will fail to realise that in the world of successful organisations, criticism and complaints are the best source of performance enhancing information. Instead, they will see their critics as the enemy. Introspection will be difficult and any suggestions that a combination of poor leadership and a lack of accountability and transparency could very well be the problem, will be shunned and denied.


“Tell the critics to stop complaining, it’s not as bad as they make it out to be. Tell them to shut up, for it is us in positions of authority who control the purse-strings.” Or do they? With 60% of the revenue reflected in municipal statements unable to find its way into their bank accounts, something as gone terribly awry.


As the late civil rights and labour leader Tyree Scott once intimated, our problems get worse when we leave the people who created them, in charge of finding the solutions.