Two recent addresses, the Finance Minister’s supplementary budget speech and President Ramaphosa’s recent pronouncements on lockdown developments – more specifically, the efforts to tackle relief funds corruption – confirms the divided, stressed and very worrying state of affairs in South Africa. They have also fanned, as opposed to dampened, the flames of growing mistrust between government and the citizens of South Africa.

In his recent address, Finance Minister Tito Mboweni painted a grim picture of SA’s economic position, which has considerably worsened under Covid-19, projecting our debt burden to skyrocket to R4-trillion this year. Quite understandably, the Minister pleaded with cabinet to slash costs across the board, failing which the country will hurtle toward a sovereign debt crisis. Mboweni added: “Debt is our weakness. We have accumulated far too much debt; this downturn will add more. This year, out of every rand that we pay in tax, 21 cents goes to paying the interest on our past debts.”


Instead of heeding the call and buckling down to the business of cutting our cloth to suit our dire situation, several unions and groups chose to strongly criticise Mboweni’s plan. Rather than adopt austerity measures and zero-based budgeting to address the burgeoning costs of government, which leaves less capital for investment, these opponents recommend that SA should instead borrow money from international lenders and spend our way out of the mess we’re in.


Don't get me wrong – the idea of spending and investing in the right places is often a very practical one; it can stimulate jobs, wealth and additional tax-payers into the economy. However, the strategy requires (a) a track record of succeeding in this space with the ability to borrow, and (b) having the money to spend. You can’t spend money you don't have. However, more importantly in the case of South Africa, we need to ensure that we get the best return possible for the investments we spend our money on, without gross leakage and waste al-la Medupi, Kusile, 1 064 rail locomotives, roads at double the price – the list goes on. Our government’s track record stinks in this regard and not much is suggesting this will change.


President Ramaphosa, in his Covid-19 update, surprised many experts, advisers and citizens when he said public schools will close for a month. This decision continues to generate a lot of debate, and while it is a complex one, the danger exists that we are fast running out of time (if we have not already) for the successful completion of the academic year, which, in itself, poses other ramifications for society at large.


The nature and responses to both addresses underlines the conflict that exists within the government. Various centres of power are chasing their own political agendas and with it, their glaring greed for access to limited state funds. Ongoing ruling party cadre deployment and the lack of accountability for people implicated in corruption, combined with political infighting, is rendering government to the status of “lame-duckness”. The lack of leadership, vision and a strategy to take the country forward is fast becoming the perception of many, and as the saying goes, perception is reality. 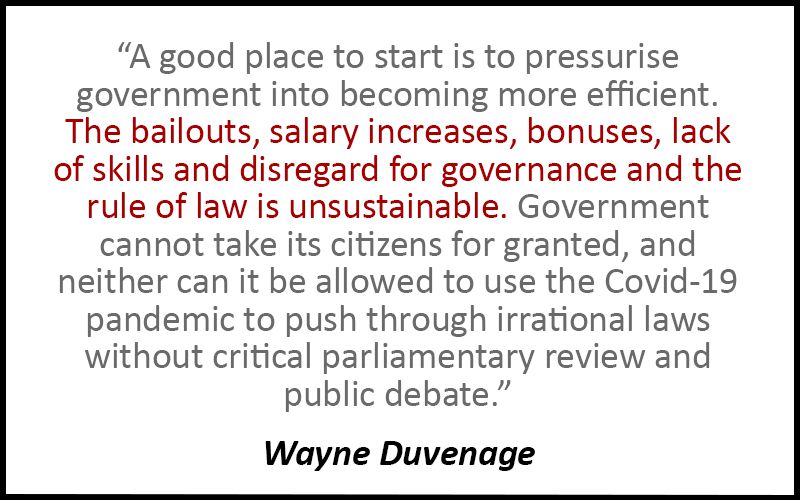 WHAT TO DO ABOUT IT?

There are, however, numerous efforts by civil society to stop the rot, some more successful than others. Of course, it’s never enough, but the alternative is to do nothing and that would be a disastrous choice. But more than ever, society, including big business, needs to stand up and get involved in fixing things. And very often the fix comes from challenging and asking tough questions of government.


A good place to start is to pressurise government into becoming more efficient. The bailouts, salary increases, bonuses, lack of skills and disregard for governance and the rule of law is unsustainable. Government cannot take its citizens for granted, and neither can it be allowed to use the Covid-19 pandemic to push through irrational laws without critical parliamentary review and public debate.

Following the same old processes and policies over and over again, and expecting our prosperity to change is sheer madness. Our country is at the precipice and major action is required to prevent the inevitable fall into a failed state. We need to build confidence, restore trust and return to a path of prosperity for all. This starts when each one of us takes a stand and we hold each other accountable.  Rest assured that OUTA will continue to do more in this space.