Problems loom when Government applies short-term thinking on State revenue streams, which is evident from incessant increases applied to various taxes, especially those that appear to ignore future challenges that threaten their income.

There is a position that says more taxes aren’t necessarily a bad thing, as these get ploughed back into the infrastructure spending of a developmental State, which improves the economy. That’s true, if it happens that way. Sadly, ours is often wasted through gross inefficiencies in leaky procurement processes that pays three times the price for infrastructure that we don’t often need, while a whole lot is lost to corruption.

The end result is over-spending and less delivery which stimulates the angry Taxman to seek more revenue, often through a short-term mindset by increasing taxes or borrowing more money, both of which can lead the country into a cul-de-sac of reduced prosperity and even that of a failed state. Of course, this depends on how exactly the money is spent and the value for taxes paid is experienced by the citizens.

Too often, the tax increase envelope is pushed too far and the purpose of specific taxes gets lost or challenged, placing the State in a precarious position when income from existing or planned revenue streams begin to fail. Good examples include SABC’s TV Licenses and Sanral’s e-Toll scheme. Reduced consumption of taxable goods, combined with technological and environmental changes, has and will continue to reduce some State revenues, which is a quandary that looms large for the various levies and taxes attached to the sale of petrol and diesel.

The price of petrol in South Africa is subject to not only the price of fuel when it lands in the country, but also by eleven other components lumped into the cost per litre of petrol and diesel sold to the consumer. All of these components, taken together, have a significant impact on the price of this important commodity. Retailers, wholesalers, and logistics companies of all sorts absorb such growing costs by shifting it downstream – increasing the cost of living for all citizens.

When one looks back at the trends of these various ‘additional levies’ and what lies ahead for the sale of petrol and diesel in a changing vehicle propulsion environment, these additional taxes and levies appear to be unsustainable.  More worrying is the ratio of the Basic Fuel Price (BFP) versus these other levies and taxes in the total price of petrol. This ratio has become inverted over the past decade, suggesting that the State should heed the impact they are having on our competitiveness as a nation through the over-taxation of petrol.

To understand this a little better, the Basic Fuel Price (BFP) fluctuates rather significantly on a monthly basis, due to the two influencing factors of the Rand/US Dollar exchange rate and the international market price of Brent Crude oil.  However, virtually all the other components making up the price of petrol and diesel are static on a monthly basis, barring an annual increase applied to the respective elements. Following years of constant increases, the total of these ‘additional levies’ comprise the bulk of the price of fuel, which was not the case too long ago.

The graph below tells an interesting story about the growing impact of other charges, the first of which is evident in the year ending March 2009, whereby 40% (or R3.45) of the average price of petrol in that year (R8.71 per litre) was attributed to the sum of these additional levies and fees. The actual BFP of the commodity made up the other 60%. Twelve years later, that ratio has become inverted, with only 35% of the average price of R14,65 per litre in 2021 being attributable to the BFP (i.e. R5.10) and 65% to taxes and levies (R9.55). 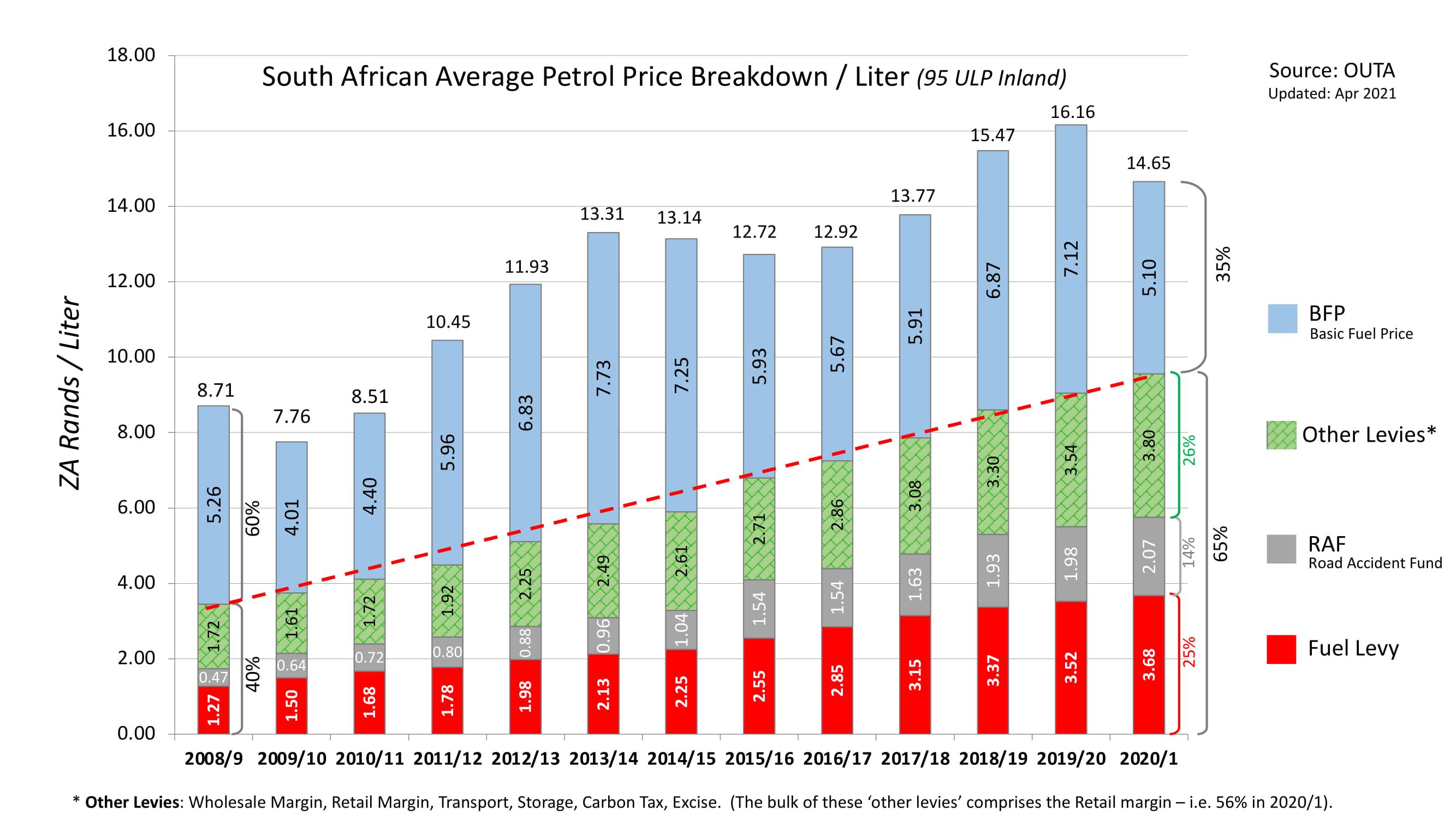 Unsustainable tax revenues require innovative solutions today
For a moment, last year in May, the Basic Fuel price dropped to R2.75c, due to low demand because of covid19 induced travel restrictions. This spiked the relative percentage of all other costs in the petrol price to just under 80%, and gives one an indication of what might lie ahead for the fuel price makeup – i.e. all taxes and very little paid for the actual commodity.
We already know that many developed countries have set clear strategies to halt the sale of new petrol and diesel powered vehicles, some as early as 2030, i.e., in less than nine years from now. While fossil fuelled cars will still dominate for years to come, in most developed countries they will probably make up a small percentage of the car park by 2040. South Africa, and other BRICS nations, will probably follow this trend; albeit more slowly.
This means that the fuel levy (currently SARS’ fourth largest revenue stream at R85bn per annum) will start to dry up. In addition, as the conversion to Electric Vehicles (EV) begins to grow over the decade ahead, the cost of generating fuel taxes will lean more heavily on the poorer sectors of society who will still make use of the older fossil fuel powered vehicles (including taxis) for longer periods.
Some may believe the State will simply switch to taxing the EV industry to off-set these lost fuel tax revenue streams. However, this will be extremely difficult because petrol related revenues are taxes on consumption, while electric vehicles will generate much of their power from off-grid solar storage mechanisms (and not necessarily Eskom’s power), a decade from now. Besides, trying to slap another surcharge / tax on the consumption of electricity will have devastating consequences for the economy given the already over-priced cost thereof.
Furthermore, while vehicle accidents and injuries will continue to happen with EV transport, their contribution to the RAF levies will dry up. Currently, motorists and the transport industry contributes around R45bn per annum toward a very stretched fund that cannot keep pace with the claims against it. There is no solution to this growing problem, which is growing at a rate of over R80bn per annum, another issue that requires the urgent attention by Government.
The time for the State to review its incessant tax increases onto various commodities is overdue. New innovative taxes that will introduce sustainable revenue streams, whilst protecting the economy from tax saturation and stagflation, is required. The involvement of civil society is essential in this process, as the State is often very blinked and applies short-term thinking when exploring new revenue streams, as it did with the eToll scheme and continues to do with the SABC TV License fees.
Increased rates and taxes must be justified by demonstrably rational use. We have seen quite the opposite. Further, global environmental and technological changes that warrant a just transition to biophysical sustainability cannot be pitted against our leaking public purse.

The main levies attached to the sale of petrol and diesel are explained below.

Fuel Levy: This is a direct tax on motorists which is channelled straight to Treasury and is not ringfenced for roads as many believe. Initially justified as a user-pays levy to build road infrastructure, this income which now generates over R85bn per annum, more than compensating for road construction and maintenance and is regarded as a soft target tax on motorists who supposedly should be able to afford these taxes. The fuel levy at R1.27 in 2009 (15% of the price of petrol) now stands at R3.83 per litre since April 2021, accounts for around 22% of the petrol price.

The Road Accident Fund (RAF), which in 2009 made up 5% of the price of petrol and generated around R9bn per annum for vehicle related injury compensation, now makes up for 14% of the fuel price and pumps around R45 billion into the RAF. This specific ‘tax’ has undergone a number of substantive increases (from R0.45c per litre in 2009 to R2.18 in April 2021), in order to keep pace with the growing demand on these lucrative revenues which are largely wasted due to inefficient administration, corruption and unscrupulous legal claims which the RAF administrators are too weak to challenge.

The Other Levies and fees go toward retail and wholesale margins, carbon tax, excise duties, transport and storage costs. These combined charges have increased from R1,72c per litre (20%) of the fuel price in 2009 to R3.80 (or 26%) by 2021. The Retail Margin (which goes to the petrol station management due to the regulated petrol price structure), has accounted for just over half of the ‘other levies’ component of the fuel price.